In the 1980’s NZ developed a world leading fisheries management system. It was based on the idea of sustainable harvesting.

Why do you think there was a need to control harvesting from the sea?

In land based harvesting we tend to exploit the grazers (sheep and cows rather than tigers and wolves)
What is it about the way we harvest from the marine ecosystem  that can be a problem?

Trophic cascades
Some other clear examples of strong top-down control are seen in the marine environment. In the Pacific Coast of North America there are “kelp forests” of very large brown algae. These are grazed by sea urchins, which are, in turn, eaten by sea otters. When sea otter populations are reduced (as they were a century ago because of hunting, and again lately due to killer whale predation) the sea urchin populations can grow out of control and graze down most the kelp, creating “urchin barrens.” Unchecked by otters, they can bloom and basically destroy the kelp forest by eating huge amounts of kelp. When population control of prey by their predators (as in the sea otter/sea urchin interaction below) then affects the next level down, the kelp, it is referred to as a “trophic cascade.”    http://www.eoearth.org/view/article/156656/

Now read this article and compare the situation described above (where otters are the keystone species) to what can happen in the NZ marine environment.

Questions
What is the keystone species in the NZ ecosystem, what has happened to that population?

But is there another side to the story? Read the this article. So what is really going on? How can we find out?

How was the control of commercial harvesting from the sea achieved ?

What evidence is there that it has worked ?

This reading will help answer those questions


Extensions:
1 It is possible for a fishery to be sustainable but still over-fished... How can this be ?

2 Seafood Industry Council:  Interactive game
What about you and me, how is recreational fishing controlled?


The Marlborough Sounds cod fishery is an interesting case study. We will look at this now. 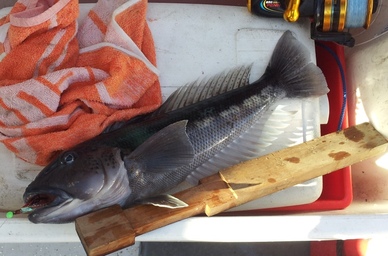 This cod (42 cm long) from the east coast of D’Urville Island (in the Marlborough Sounds) is too big and is heading back!

Why would we let the big ones go?
(hint find out about their sex lives)

NMIT Aquaculture students set up aquaria like this in some Nelson schools.
These salmon juveniles destined for a fish farm.

Surely this is the way of the future?
Question
Is fish farming the answer?

Read this article and decide for yourself whether aquaculture really is the way of the future. The comments after the text are esp. worth reading

The situation in NZ is covered well here: